Augusta is a consolidated city-county located along the Savannah River and the central eastern border of Georgia. Around 197,166 residents live in this region. The town is home for Masters Golf Tournament, thriving culinary scene, outdoors activities and artwork. Augusta, GA has become a destination for senior citizens who want low cost of living and warm weather.

Augusta was ranked at number 63 as the best place to retire and position 76 as the ideal place to live by the US News. The research group was looking for the right areas to live based on the job market, the value of living, and quality of life. It evaluated 125 metro regions in the United States during the survey.

Augusta attracts retirees, families, and students. Residents under 20 years make up more than a quarter of the total population, and 14 percent are senior citizens. It is also home to around 20,000 veterans since the Fort Gordon military base is located in the area. Residents have freedom of worship, and there are churches, mosques, and temples for various religious groups.

The cost of living in Augusta is cheaper than the national average. It varies with neighborhoods. The living costs draw families, retirees, and college students who wish to live a decent life without paying a high cost for housing.

Most of the Augusta residents use their cars to move around. Augusta Public Transit has nine a rural transit service and fixed bus routes. Riverwalk pavement is pedestrian-friendly. The regional airport offers services to Charlotte and Atlanta via American Airlines and Delta Air Lines.

THIS WELL KEPT AND MOVE-IN READY 4 BEDROOM HOME HAS EVERYTHING YOU'VE BEEN WAITING FOR: RICH COLORED CABINETS THROUGHOUT (EVEN IN THE LAUNDRY ROOM) GRANITE COUNTERS, SURR...

Take advantage of this great opportunity to get two vacant lots for the price of one, for a total of 0.42 acres. The main parcel is a 0.39 acres residential lot. The parc...

#PerfectTriLevel This home will not last long! As you walk into the home you will be greeted by the manufactured hardwood flooring. The formal living room overlooks the m...

Movie Set house! Yes Dennis Quaid filmed in this home for the movie "The Hill". Use your imagination and bring back to life the old beautiful fireplace, and the gorgeous ... 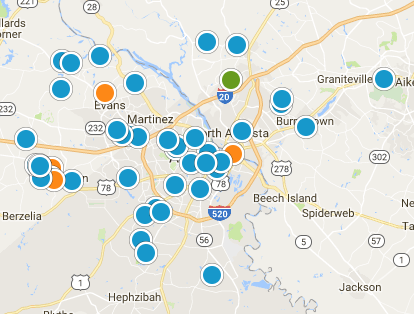